Recent studies from the laboratory of Zaal Kokaia (Lund University, Sweden) demonstrated that the transplantation of cortically fated human induced pluripotent stem (iPSC)‐derived long‐term neuroepithelial‐like stem cells into the brain of a rat model of cortical stroke led to cell engraftment and improvements in sensorimotor deficits [1-3]. While these findings provided evidence for the potential efficacy of human iPSC-based therapeutics for cerebral cortex disorders, nearly all relevant studies have been carried out in animal models [4], and so, the in vivo fate of iPSC-derived neurons in the human cortex remains relatively unknown.

Overall, the authors provide ample evidence that human iPSC-derived neurons can functionally integrate into a human adult host neural network, and in doing so, moves the field one step closer to the clinical translation of patient-specific neuronal replacement strategies that promote functional recovery in patients with brain injuries or those suffering from cerebral cortex disorders.

For more on the therapeutic application of human iPSCs and their derivatives, stay tuned to the Stem Cells Portal! 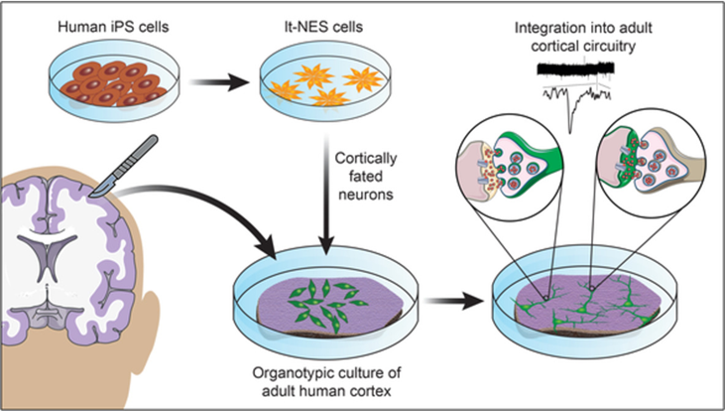