The DNA double-strand breaks generated by the CRISPR/Cas9 gene editing system can be repaired throughout the cell cycle by the error‐prone non-homologous end joining (NHEJ) pathway or during S/G2 phases by the more precise homology‐directed repair (HDR). The application of HDR‐mediated gene editing in human hematopoietic stem cells to precisely correct disease‐causing mutations suffers from a relatively low efficiency in primitive long‐term reconstituting stem cells [1-3], which currently prohibits the exploration of ex vivo correction of hematopoietic stem cells as a therapeutic option for a range of diseases/disorders.

In a new STEM CELLS study, researchers led by Donald B. Kohn (University of California Los Angeles, Los Angeles, California, USA) now report on their attempts to enhance HDR-associated gene editing in human hematopoietic stem cells. To this end, Lomova et al. now establish that the application of a Cas9 variant with decreased nuclease activity in G1 and M phases coupled with S/G2 cell synchronization can improve the efficiency of hematopoietic stem cell gene editing in vitro and in vivo [4].

To create a Cas9 variant that preferentially promotes HDR in the S/G2 phase of the cell cycle, the authors of the study followed a previously reported strategy [5] by fusing a fragment of the Geminin domain to the C‐terminus of Cas9 to allow the protein to be ubiquitinated and degraded by the APC/Cdh1 complex in G1 and late M phases. The study then employed a selective inhibitor of CDK1 to transiently arrests cells at the G2‐M transition for synchronization purposes. Encouragingly, the in vitro assessment of this enhanced gene-editing strategy provided evidence an improvement in the HDR/NHEJ ratio, a finding confirmed in later xenotransplantation studies of edited human hematopoietic stem cells in immunodeficient mice.

Overall, the application of cell cycle‐dependent control of nuclease activity and DNA repair pathways as a means to enhance gene-editing in hematopoietic stem cells represents a clinically-relevant strategic approach to improve treatments for congenital diseases of the blood system.

Can we extend this approach to promote enhanced gene-editing in other stem cell types? Stay tuned to the Stem Cells Portal to find out! 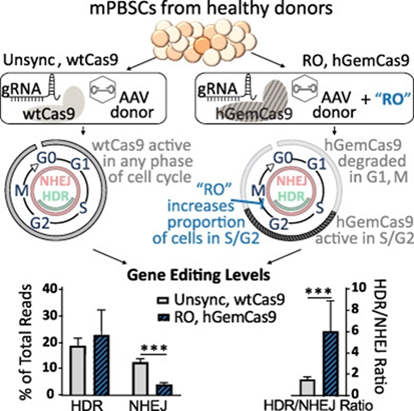