In their more recent STEM CELLS Translational Medicine article [4], the authors now describe their findings concerning the cellular and molecular events that occur when P2X7R‐modified PDLSCs encounter other PDLSCs in an inflammatory microenvironment, such as that associated with periodontitis [5]. Xu et al. now report that P2X7R‐modified PDLSCs positively influence other PDLSCs via an exosome‐mediated paracrine mechanism in a study that may pave the way for the development of enhanced treatments for periodontitis.

The authors analyzed the responses of wild type PDLSCs cultured in an inflammatory osteogenic microenvironment following exposure to complete conditioned medium or only the exosomal fraction of conditioned medium derived from P2X7R‐modified PDLSCs. Interestingly, exposure to conditioned medium or exosomes comparably reduced inflammation‐mediated changes in PDLSCs, suggesting that exosomal components played a key role. Subsequent microarray analysis of P2X7R‐modified PDLSC-derived exosomes established the elevated expression of microRNAs - miR‐3679‐5p and miR‐6747‐5p - that can directly reduce levels of GREM‐1 expression, a bone morphogenetic protein antagonist [6], to enhance osteogenesis and rescue the dysfunction of inflammation‐compromised PDLSCs from dysfunction.

Overall, the authors provide evidence that the paracrine capacities of P2X7R‐modified PDLSCs play a crucial role in enhancing the osteogenesis of PDLSCs under inflammatory conditions and highlight how the administration of exosomes and microRNAs may represent a means to improve the PDLSC-mediated treatment of periodontitis.

For more on the therapeutic potential of engineered periodontal ligament stem cells under inflammatory conditions, stay tuned to the Stem Cells Portal. 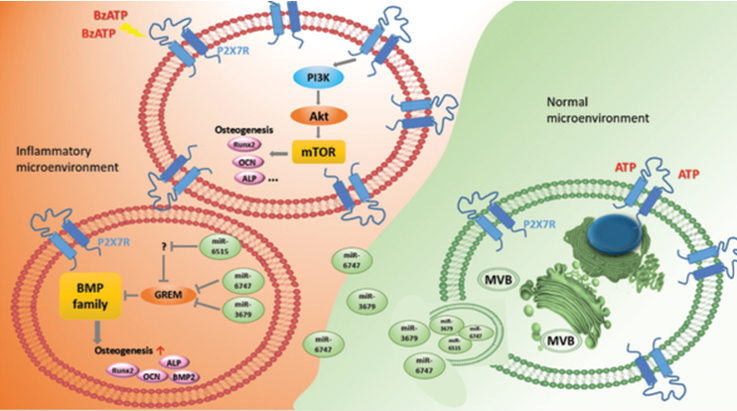