Review of “A combination of intrathecal and intramuscular application of hMSCs partly reduces the activation of necroptosis in the spinal cord of SOD1G93A rats” from STEM CELLS Translational Medicine by Stuart P. Atkinson

Mesenchymal stem cell (MSC) therapy has recently emerged as a potentially effective means to treat amyotrophic lateral sclerosis (ALS), an adult neurodegenerative disease defined by the loss of progressive motor neurons in the spinal cord, cerebral cortex, and brain stem. Recent studies have sought to define the best mode of delivery for MSCs and to establish the exact mode of action, and to this end, researchers from the laboratory of Pavla Jendelova (Czech Academy of Science/Charles University, Prague, Czech Republic) recently reported in STEM CELLS on the positive therapeutic effects of a single intrathecal injection of human MSCs in SOD1 transgenic rat brains [1], a well-described model for ALS.

The team now return with a new STEM CELLS Translational Medicine article in which they explored the effects of treatment with human MSCs or MSC-conditioned medium [2] through intrathecal injection, intramuscular injection [3], or a combination of both administration approaches in SOD1 rats. Řehořová et al. now provide evidence that repeated intrathecal/intramuscular application of MSCs can protect motor neurons and neuromuscular junctions by reducing the levels of major cell death pathways [4].

Initial assessments in SID1 rats revealed that MSC treatment represents a potentially efficient means of battling against ALS by i) increasing lifespan, ii) improving motor neuron survival, maintaining neuromuscular junctions, and delaying the decline in motor activity, iii) reducing the level of astrogliosis, and iv) reducing the number of apoptotic cells and the expression of a range of proteins related to apoptosis, autophagy [5], and, importantly, necroptosis [6] in the brain. Repeated intramuscular and intrathecal MSC administration supported the most significant and widespread improvements, while intramuscular treatment alone provided for the least improvement, with only a reduced influence on life extension and lack of the neuroprotective effect evident.

MSCs survived for only 2-4 weeks following implantation, suggesting that their long-term therapeutic effects may derive from the secretion of various supportive factors to prompt endogenous repair. However, while the repeated intrathecal administration of MSC-conditioned media led to a general improvement in motor activity and a trend towards extended lifespan, the authors failed to see alterations during their molecular analysis to confirm the initially encouraging finding. This may suggest that ALS treatment requires both the paracrine activity of MSCs combined with their ability to differentiate in vivo.

Overall, the authors believe that their new study highlights the potential of repeated intrathecal and intramuscular MSC administrations as a potentially effective treatment for ALS patients. For more on MSC therapy, newly developed ALS treatment strategies, and more, stay tuned to the Stem Cells Portal! 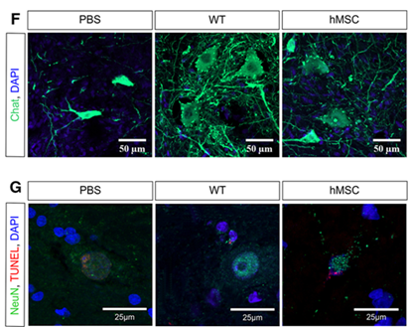