Deciphering the Role of Lpar4 in Mesenchymal Stem Cell Differentiation

An imbalance in the osteogenic and adipogenic differentiation of human mesenchymal stem cells (MSCs) during normal aging may promote the onset of diseases such as osteoporosis and obesity [1, 2], and so, many have sought to determine the molecular mechanisms controlling the skewed differentiation propensity observed. Studies focusing on lysophosphatidic acid receptors (LPARs) have shown that LPAR1 activation prompts the osteogenesis of human MSCs [3] and inhibits adipose tissue expansion [4, 5], while LPAR4 activation inhibits the osteogenesis of MSCs [3] but inhibits adipose tissue expandability and protection from hepatosteatosis and insulin resistance in a diet‐induced obesity model [6].

While these data have helped to decipher the roles of Lpar4 expression in MSCs - the regulation of adipocytic and osteogenic differentiation through a novel RhoA/ROCK1/β‐catenin pathway - they also highlight the potential of Lpar4 as a pharmaceutical target in the treatment of metabolic disorders such as osteoporosis and obesity that can arise during the aging process.

For more on Lpar4, MSC differentiation, and potential treatments for metabolic syndromes, stay tuned to the Stem Cells Portal! 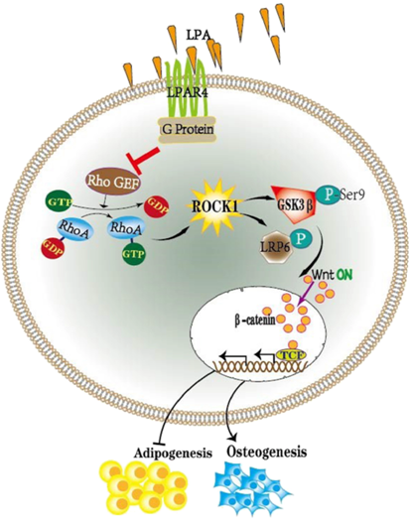