Recent research has revealed that pluripotency-associated factors control the expression of miR‐137 [1], a brain‐enriched micro (mi)RNA whose dysfunction has been linked to neurodevelopmental disorders [2, 3] and tumorigenesis. While data from mouse cells have suggested that miR‐137 influences neuronal differentiation and inhibits cell proliferation, the role of miR‐137 in human neural stem cells (NSCs) remained to be fully deciphered. In their recent STEM CELLS article, researchers led by Yogita K. Adlakha (Brain Research Centre, Manesar, India) investigated the role of miR‐137 in human NSCs [4], with their findings suggesting that miR‐137 can modulate NSC fate by altering mitochondrial dynamics [5].

However, miR‐137 expression also accelerated mitochondrial biogenesis in a PGC1α-independent manner through the upregulation of both nuclear factor erythroid 2 (NFE2)‐related factor 2 (NRF2) and transcription factor A of mitochondria (TFAM). Additionally, the expression of miR‐137 also induced mitochondrial fusion and fission, leading to an increase in mitochondrial content, the activation of oxidative phosphorylation (OXPHOS), and an increase in oxygen consumption rate. Overall, this suggests that miR-137 can enhance neural differentiation of NSCs by modulating mitochondrial activity via several different mechanisms.

Of note, the authors also established that miR‐137 overexpression in NSCs prompted an increase in the levels of the OCT4 and SOX2 pluripotency-associated transcription factors. As the miR‐137 promoter also contains binding sites for OCT4 and SOX2, the authors suggest the existence of a feed‐forward self‐regulatory loop.

In this fascinating new study, the authors have shown that miR-137 enhances the neural differentiation of NSCs by modulating the mitochondria to match the metabolic/energetic requirements of the newly formed neurons. As the normal age-related decrease in neurogenesis associates with comprised regenerative abilities [6], the authors hope that their findings may lead to the development of novel approaches to battle the aging process and aid the treatment of neurodegenerative diseases.

For more on how microRNAs regulate stem cell activities, stay tuned to the Stem Cells Portal! 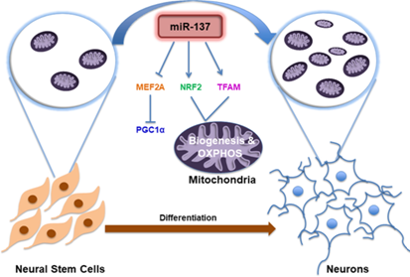