Deciphering the Impact of FGF2 on Adipose-derived Stem Cell Culture

Review of “The Influence of Fibroblast Growth Factor 2 on the Senescence of Human Adipose-Derived Mesenchymal Stem Cells During Long-Term Culture” from STEM CELLS Translational Medicine by Stuart P. Atkinson

The prolonged in vitro expansion of adipose-derived mesenchymal stem cells (ASCs) required for their clinical application can lead to the accumulation of unwanted alterations that ultimately impact their proposed therapeutic output. Strategies employed to maintain the stem cell characteristics and proliferative abilities of cultured ASCs include the addition of growth factors such as fibroblast growth factor 2 (FGF2) to the culture medium [1]; however, we know little regarding the long-term effects of FGF2 on ASCs. Studies have suggested the stability/safety of ASCs following prolonged culture [1, 2], although tumorigenesis-associated alterations to mesenchymal stem cells (MSCs) have been shown to increase their neoplastic transformation potential in response to FGF2 treatment [3].

Compared to prolonged in vitro culture without FGF2, FGF2-treated ASCs displayed negligible signs of senescence, including small cell size, low levels of senescence-associated beta-galactosidase staining, reduced p21 expression, and elevated proliferation kinetics during early passages, which the authors associated with the upregulation of an upregulation of FGF receptor 1c (FGFR1c) expression and the enhanced expression of downstream Signal transducer and activator of transcription 3 (STAT3). However, FGFR1c and STAT3 expression reduced upon the prolonged culture of ASCs with FGF2, leading to a reduction in cell proliferation and the induction of multiple indicators of senescence. Finally, the authors failed to observe any evidence of in vitro or in vivo tumorigenicity after the long-term expansion of FGF2‐cultured ASCs.

Overall, this study suggests that while FGF2 treatment may allow for the expansion of ASCs suitable for therapeutic purposes over a limited number of passages, cells derived from long-term treated cultures may display significant deficiencies in their reparative/regenerative potential.

For more on how long-term in vitro culture and culture supplements can negatively impact the therapeutic potential of stem cells, stay tuned to the Stem Cells Portal! 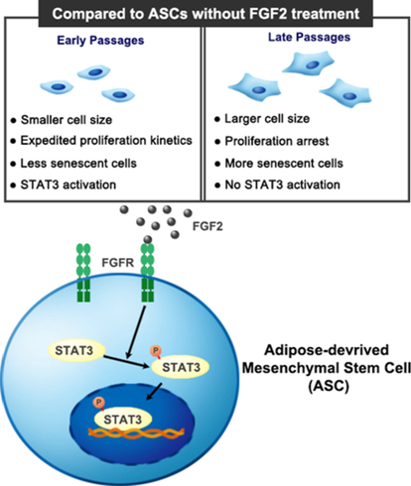