Deciphering the Crucial Roles of Metabolites in the Regulation of Pluripotency

Nicotinamide adenine dinucleotide (NAD+) and its precursor metabolites represent important regulators of both cell metabolism and cell state, and a wide range of studies have shown that increasing cellular NAD+ levels may support stemness in both mouse adult and pluripotent stem cells through altered mitochondrial function [1]. In their new STEM CELLS article [2], researchers led by David K. Gardner (University of Melbourne, Victoria, Australia) report on their findings related to the potential of NAD+ to support the pluripotent state of human embryonic stem cells (hESCs) through the regulation of metabolism.

Lee et al. treated hESCs with NAD+ and evaluate any alterations to glycolytic and mitochondrial metabolism, self‐renewal, and differentiation. Furthermore, they also investigated the role of the malate aspartate shuttle, which recycles cytoplasmic NAD+ and has a previously described role in early developmental programming [3, 4]. Interestingly, the study found that NAD+ administration to hESCs prompted an increase in mitochondrial oxidative metabolism, the partial suppression of glycolysis, and the stimulation of amino acid turnover. These alterations, in turn, led to a significant increase in the consumption of glutamine to allow for the derivation of ATP oxidatively through the malate aspartate shuttle, the recycling of NADH in the mitochondria for ATP production, and the regeneration of cytoplasmic NAD+. Interestingly, this metabolic remodeling associated with an NAD+-mediated increase in the expression of pluripotency-associated gene expression and hESC proliferation, the inhibition of BMP4-induced mesendodermal differentiation, and a global reduction in the trimethylation of lysine 27 histone H3, a transcriptionally repressive histone modification.

According to these alterations, the authors suggest that NAD+ treatment induces an intermediate naïve‐to‐primed bivalent metabolic and pluripotent state in hESCs, as previously observed following the pharmacological or lipid deprivation‐induced inhibition of ERK signaling [5].

Finally, the authors also highlighted a crucial requirement for the malate aspartate shuttle-mediated control of NAD+ recycling in the self-renewal capacity of hESCs; the inhibition of malate aspartate shuttle prompted a significant loss of oxidative metabolism, a reduction in the expression of pluripotency-associated gene expression, and a decrease in proliferation, which together suggests an exit from the pluripotent state.

Overall, the authors highlight the significant role of NAD+ levels in controlling the pluripotent state of hESCs and, for the first time, the critical involvement of malate aspartate shuttle in regulating hESC metabolism and fate.

For more on the significant role of cell metabolites in human pluripotent stem cells, stay tuned to the Stem Cells Portal! 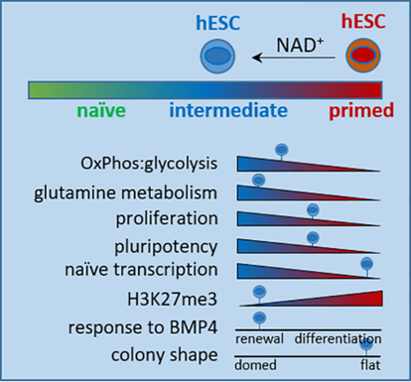