While corneal allografts represent the gold-standard treatment for non-inflammatory diseases that lead to vision loss, the severe lack of donor tissues has prompted the search for new approaches that include the application of a rare population of multipotent corneal stromal stem cells resident in the human cornea (Read the original STEM CELLS study here!) [1]. This easy to obtain stem cell-type [2] has been employed in ocular regeneration (See the original STEM CELLS study here!) [3] and in the generation of corneal tissues that mimic the human cornea [4-7].

The authors first developed a mouse model of corneal stromal scar, which they induced through the application of liquid nitrogen after epithelial debridement. This mode of injury prompted an early inflammatory response that was followed by common cellular events that occur after corneal injury, such as the apoptosis of keratocytes and the transformation of keratocytes into myofibroblasts. A later inflammatory response induced known features of the corneal scarring process, such as the synthesis of collagen type III, the impairment of stromal ultrastructure, the induction of corneal stromal haze, and an increase in corneal rigidity.

Corneal stromal stem cells can be easily retrieved and cultured from patient or donor eyes and, overall, this study provides robust preclinical evidence for the utility of these cells in the treatment of corneal scarring through the regeneration of transparent stromal tissue.

For more on the therapeutic potential of corneal stromal stem cells in the treatment of vision loss, stay tuned to the Stem Cells Portal! 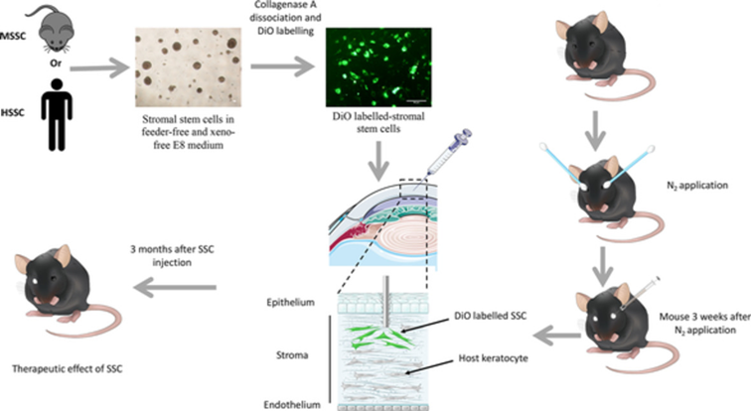