Evidence suggests that the general heterogeneity of mesenchymal stem cells (MSCs) can impede their therapeutic output and blur the in-depth understanding of their biological output [1-4]. Furthermore, donor‐specific differences can also influence therapeutic efficacy, thereby adding another level of complexity [5-7].

In a recent STEM CELLS article [8], researchers from the laboratory of Diego Correa (University of Miami, FL, USA) describe their attempts to isolate and characterize a subpopulation of bone marrow-derived mesenchymal stem cells (MSCs) using a marker of cells of the perivascular niche (CD146, also known as the melanoma cell adhesion molecule [MCAM]) or cell surface glycoprotein MUC18). The team hoped that a homogenous population of perivascular-like MSCs might exhibit more robust responses to inflammatory insult than other MSC subtypes and hence provide a more therapeutically “powerful” approach to the treatment of various conditions.

Overall, these findings suggest that populations of CD146-positive MSCs will provide for enhanced therapeutic outcomes through their enhanced sensory/secretory/immunomodulatory capacities in vitro and in vivo. Furthermore, advances such as this may aid the translation of MSC therapies by increasing uniformity during manufacturing, providing for more reproducible outcomes, and allowing the full definition of the mechanism of action regarding the treatment of inflammatory-related conditions.

For more on how to improve mesenchymal stem cell therapies through cell selection techniques, stay tuned to the Stem Cells Portal! 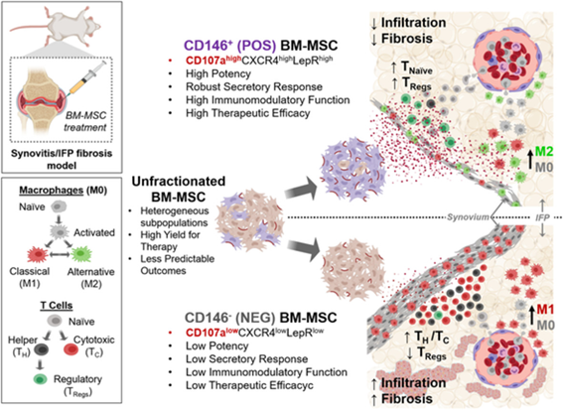