Can Tissue Inhibitor of Metalloproteinases Ensure the Safety of PSC-derived Therapies?

Recently, a study from the laboratory of Sunghoi Hong (Korea University, Seoul, South Korea) found that neural stem cell‐derived conditioned medium (NSC‐CM) triggered morphological changes and reduced cell proliferation in a melanoma cancer cell line [3]. Based on these findings, the team sought to explore the potential of NSC-CM in the inhibition of tumorigenesis by contaminating undifferentiated PSCs and in their new STEM CELLS article [4], Choi et al. describe how NSC‐CM inhibited PSC‐derived teratoma formation in mice through cell cycle arrest and increased apoptosis. Furthermore, this study highlighted a potential role of tissue inhibitor of metalloproteinase (TIMP) proteins present in the NSC-CM as critical components in the inhibition of tumorigenesis.

The authors discovered that NSC-CM treatment altered the morphology and inhibited the proliferation of both mouse and human PSCs, PSC‐derived neural precursors, and prevented teratoma growth without negatively impacting the potential of the neural precursors to differentiate into neurons. Mechanistically, NSC-CM treatment appeared to prompt a downregulation Oct4 and CyclinD1 (an Oct4 target) gene expression to induce cell cycle arrest and an increase in apoptosis via DNA damage response‐driven p53 activation.

While scrutinizing the protein composition of NSC-CM for the agents affecting this response in PSCs, the authors noted the elevated secretion of the TIMP‐1 and -2, proteins, which is known to modulate cell proliferation and apoptosis in PSCs [5, 6]. Further analysis found that both TIMP-1 and -2 inhibited PSC proliferation in vitro and teratoma growth in vivo through the inhibited activity of the matrix metalloproteinase (MMP)‐2 and MMP‐9 proteins, which themselves play roles in cell proliferation, anti‐apoptosis, invasion, and migration.

In summary, the authors now highlight the TIMP‐1 and ‐2 proteins as a potentially effective means to inhibit teratoma growth caused by undifferentiated PSCs without influencing differentiation potential of other stem cells, thereby providing evidence for the clinical applicability of this strategy to improve the efficacy and safety of PSC‐based therapies in the future.

For more on how to improve the safety and effectiveness of PSC-based therapeutic strategies, stay tuned to the Stem Cells Portal! 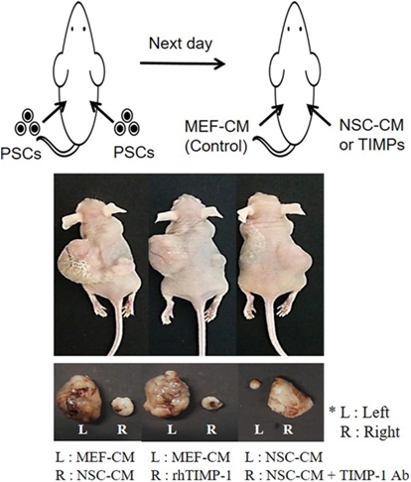