The general heterogeneity of human mesenchymal stem cells (MSCs) represents a crucial barrier to their widespread therapeutic application; therefore, identifying a subpopulation of cells with enhanced therapeutic potential may represents an exciting approach. Furthermore, the long-term in vitro propagation of heterogenous MSCs can reduce their therapeutic capacity due to the gradual onset of senescence.

In previous studies, researchers from the laboratories of Hideyuki Okano (Keio University, Tokyo) and Yumi Matsuzaki (Shimane University, Shimane, Japan) employed a range of cell surface markers to assess the quality and clonality of MSCs derived from a range of sources [1, 2]. Interestingly, they highlighted a rapidly expanding clonal population of MSCs that displayed an immature phenotype, enhanced expansion capacity, and robust trilineage differentiation potential [1, 3-5].

In a new study, the authors sought to explore the molecular mechanisms that support this population of immature human MSCs, given their therapeutic potential. As described in a new STEM CELLS study [6], Harada et al. now provide evidence that Frizzled 5 (FZD5) plays a crucial role in regulating the maintenance of proliferation and multilineage differentiation potential of human MSCs. Can this exploration of FZD5 expression lead to an approach to boost the therapeutic relevance of human MSCs?

Data from the author’s previous study had highlighted the upregulation of Wnt signaling genes in immature MSCs, and they soon discovered the significant and specific overexpression of FZD5, a 7-transmembrane domain cell surface receptor protein for WNT5A. Both primary and cultured MSCs express FZD5, and treatment with WNT5A significantly promoted MSC proliferation; furthermore, the sustained overexpression of FZD5 in cultured MSCs delayed their eventual cell cycle arrest due to senescence. Conversely, FZD5 knockdown in MSCs prompted a significant decrease in both the proliferative capacity and differentiation potential and an increase in the levels of senescence-associated markers.

Overall, the authors suggest that FZD5 cell surface expression may allow for the isolation of a more homogenous therapeutically-relevant MSC population and that non-canonical Wnt signaling through the WNT5A-FZD5 axis may maintain the therapeutic capacity of human MSCs and suppress the onset of senescence during long-term in vitro culture. Future studies will include the characterization of the pathways downstream of WNT5A/FZD5 signaling and the exploration of how non-canonical Wnt signaling regulates the immaturity, and hence therapeutic relevance, of human MSCs.

For more on how FZD5 may boost the therapeutic relevance of human MSCs, stay tuned to the Stem Cells Portal! 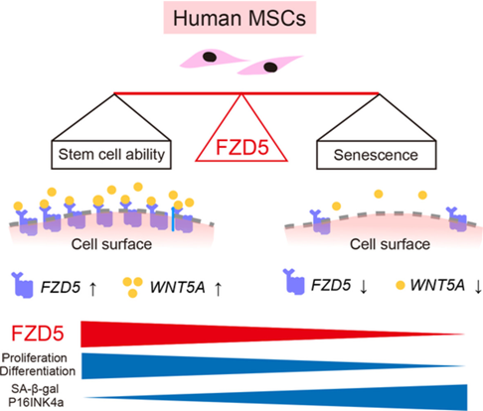